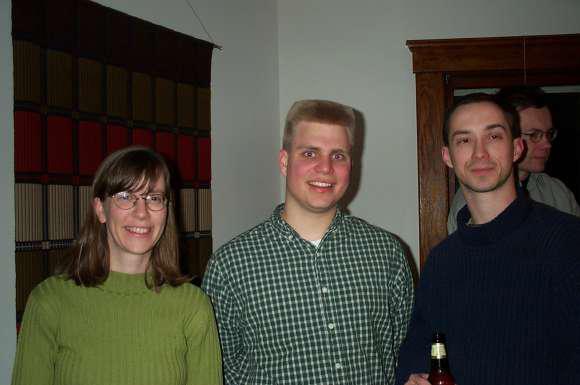 My thesis advisor was Uli Walther. During my first few years at Purdue, I passed by his door every day in route to my seventh floor office. I was always very curious and often stopped in to ask Uli a math question. Uli was very patient and gave very detailed answers, often with involved references.

I also appreciated him on a personal level. I enjoyed listening to his soccer stories, but I also appreciated the wisdom he shared. Our relationship grew and I felt comfortable engaging in even more personal discussions, for example, asking him as an East German, about communism. Part of what made him unique was this cultural background. He would tell a funny story and end it with a wide smile. But then other students would be confused because he would often tell a joke with a poker-straight face: in his culture no one thought to laugh at a joke a second time.

Our discussions grew, often spilling over into lunch at the Student Union or off campus. Uli even ventured out with us grad students from time to time to play poker. We used to play a game called Fibonacci Crisscross which, if I remember correctly, he invented. But he was still my advisor and treated that relationship professionally. He would not hold back on constructive criticism. For example, he would often confront me about my poor writing. I will always remember when he explained that "x=2" is a complete sentence: 'x' the subject; '=', a stand in for 'is equal to', serves as the predicate or verb; and '2', naturally, is the object. This was revelatory to me, at the time.

Uli was a good teacher even though I was his first student. Early on, after I officially became his student, he challenged me with what we called a baby question, or a problem to serve as a warmup to a larger, more significant, PhD-worthy problem. The idea was to tackle a particular problem in two dimensions (simpler) and then progress from there. I also used software to guide me. Unfortunately, Saito published a paper demonstrating the higher-dimensional case. Saito doesn't know it, but I felt like he was picking on me in Indiana all the way from Japan. My work did not assume a reduction the same way he did. That missed case became a chapter in my thesis.

Work on that baby problem morphed into a different study. I wanted to calculate an eigenspace decomposition of a monodromy operator. I tried to prove that this monodromy behaved in a certain manner, only to have Uli state that I was in error. Frustrated, I spent the next day or two trying to prove that I was right. When I presented what I learned to Uli, he swatted down my claim with a very simple counter example.

Now, in a proof, if a counter example can be provided for any statement, that statement must be, by definition, false. For my version of the statement to be true, one of the numbers had to be an eight, whereas Uli trivially demonstrated that it was in fact three. Uli's counter example was so obvious there was no disputing it.

For awhile, I obsessed over this problem and would catch myself trying to prove the same statement over and over again. But then, to bring me back to Earth, I would grab Uli's example and reexamine it. I did this to squelch this obsession and to focus on something more productive. Even in the field of mathematics, we become emotionally attached to old work. But in order to grow and progress, I have had to learn to shove old work aside so I could discover even more beautiful patterns around me.

So with practice I broke this obsessive pattern of behavior and stopped trying to prove statements I knew to be wrong. Instead I took the advice of my advisor: I began all work with simpler example patterns. That was the lesson that stuck with me after that event. Start with the baby problem, then move forward towards more complexity, towards the actual problem you are attempting to solve.

Lesson learned. I tackled my next problem starting from simpler principles. And with this problem, I couldn't shortcut the answer using a computer. I buckled down and worked out a few simpler examples, which led to tackling harder examples . . . eventually, I saw it: a new pattern emerged.

The next day, I presented the pattern to my advisor. He had only one question: "Can you prove it?" Two weeks later I came back to him and answered with a confident "Yes!" Now, one must understand, as part of the process for laying claim to a discovery, one has to search through the literature and find out if someone else has already proven it. At the time, this task was daunting, but I combed through the research. Eventually, I found some papers where my discovery actually served to augment previous work. I.e., it was additive. In a topology paper, I found another part of my proof similarly addressed, therefore lending validation at least to that part of the problem I was trying to solve. But as I spent the time pouring over prior work, I gradually felt satisfied that my work was indeed new.

But I was in a quandary about the topology result. It was if they solved that part of my proof similarly, but using a completely different language. I could cite the work, but the translation needed to demonstrate how their work confirmed mine proved to be too much. So I included my own algebraic proof while at the same time citing the topology paper. Uli noticed, challenged me on it, but ultimately accepted my approach. The end result: my PhD Thesis, Bernstein-Sato polynomials and Picard-Lefschetz monodromy.

Sometimes figuring out what not to do is more important than what you decide to do.

Today, I sometimes find I still don't heed this lesson. Or at least not often enough. A digression, but several aspects of my life right now are, in fact, reminding me of this lesson.

I hope you have enjoyed this story. I enjoyed writing it and hope to gain by revisiting it. I hope you can too. What a joy it is that we live in an age that this story can be shared with anyone.